An Objective-C wrapper library for the Homebrew package manager.

MRBrew is a simple Objective-C wrapper library for the Homebrew package manager. It makes performing Homebrew operations from your apps a breeze:

Now you have a powerful text editor installed.

MRBrew uses Automatic Reference Counting and has been tested with OS X versions 10.7—10.10.

MRBrew can be integrated into an existing project using CocoaPods. Simply add the necessary dependency to your Podfile as follows:

Then install the dependency into your project:

MRBrew depends on Homebrew for the heavy lifting, and assumes the default installation path of /usr/local/bin/brew (though this can be specified if the brew executable has been moved). If you don't have Homebrew installed, follow the official instructions to get brewing.

To perform an operation, pass an MRBrewOperation object to the shared MRBrew instance using the performOperation:delegate: method.

For example, the following code would perform a Homebrew update operation:

Operations that require a formula to be specified should be passed an MRBrewFormula object, which is just as easy to create. For example:

Each call to performOperation:delegate: spawns a subprocess in a separate thread that won't interrupt processing in the rest of your app. Multiple operations can be performed by making repeated calls to performOperation:delegate:. Operations are placed into a queue and executed concurrently. If you would prefer operations to execute in series, just call [MRBrew setConcurrentOperations:NO].

Note: All operations performed by the MRBrew class inherit the environment from which those operation were launched. Use setEnvironment: to define your own environment variables.

Specify the operation name exactly as defined by Homebrew (e.g. @"upgrade"). Both formula and parameters may be optional depending upon the operation being performed (see man brew for more details).

You'll probably want to be notified when an operation has finished, failed, or generated output. This can be achieved using the delegate pattern by implementing the MRBrewDelegate protocol in your controller and specifying the following optional methods:

Now, whenever you perform an operation with performOperation:delegate:, specify your controller object as the delegate in order to receive callbacks when an operation has finished, failed, or generated output:

If you expect your controller to manage (and therefore receive callbacks for) multiple types of operation, you should inspect the MRBrewOperation object in your delegate methods to determine how to respond to particular types of operation:

The constants referenced above can be found in the MRBrewConstants.h header and are used to determine the type of operation received by your delegate methods. Import this header in your delegate implementation if you plan to use these constants.

If you are responding to a custom operation that does not already have a constant defined, simply provide your own, or use a string literal:

Alternatively, if you need to respond in your delegate methods to a specific operation, use the isEqualToOperation: method of the MRBrewOperation class to confirm the operation that generated the callback and respond accordingly.

Operations can be cancelled using one of the following MRBrew instance methods (remember to obtain a a reference to the shared MRBrew instance using the +sharedBrew class method first):

If the brew executable has been moved outside of the default /usr/local/bin/ directory (generally not advisable), specify its location before performing any operations:

This call only needs to be made once per project.

Unit tests have been provided as part of the MRBrewTests target, and additional tests should be added where required. OCMock is required for running these unit tests and can be installed using the CocoaPods dependency manager.

With CocoaPods installed, run the following command from the root directory of your cloned repository to install the dependency:

If you plan to contribute to the MRBrew project, fork the repository, make your code changes, then submit a pull request with a brief description of your feature or bug fix. Test suites and unit tests are provided for the MRBrewTests target, and additional test methods should be added where necessary.

If you're using Dash (and why wouldn't you be?) documentation can be installed directly from the Downloads section. Select Cocoa Docsets and perform a search for mrbrew: 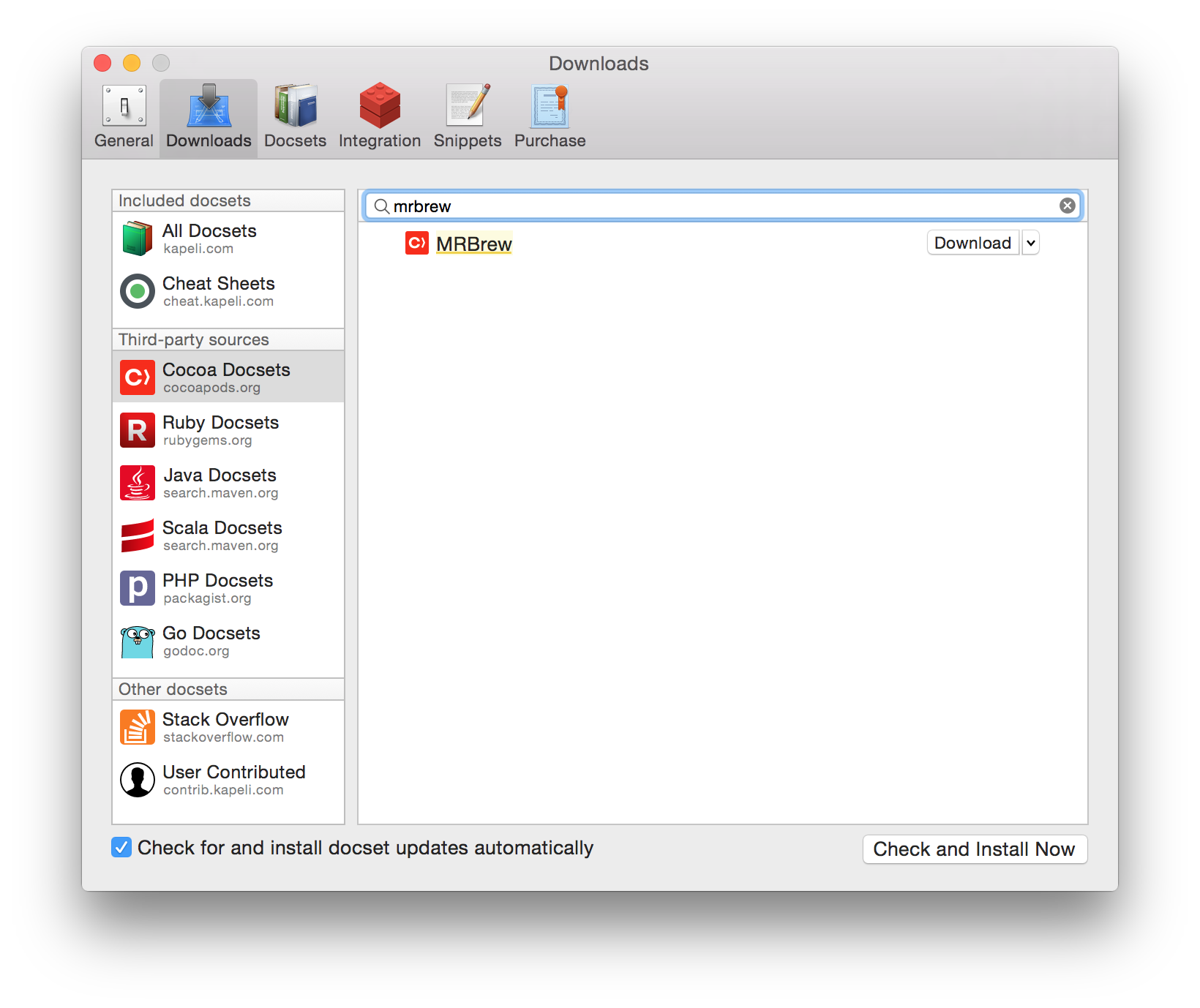 Alternatively, visit CocoaDocs for access to the documentation online, or inspect the header files directly.

MRBrew is provided under the terms of the MIT License.

The following libraries and resources were used in the making of MRBrew: